FOR IMMEDIATE RELEASE
Wednesday, May 4th, 2016

Toronto, Canada: Over four hundred ‘wanted’ posters affixed to walls, posts, and newspaper boxes greeted Tahoe Resources shareholders on their way into the mining company’s 2016 shareholder meeting this morning. The posters highlight charges against various Tahoe employees, ranging from ordering the shooting of residents to industrial contamination, as well as human rights and environmental abuses alleged by communities surrounding Tahoe’s flagship mine in Guatemala. Identical posters were also plastered across downtown Vancouver and Reno, the locations of Tahoe Resources’ Canadian and American headquarters. 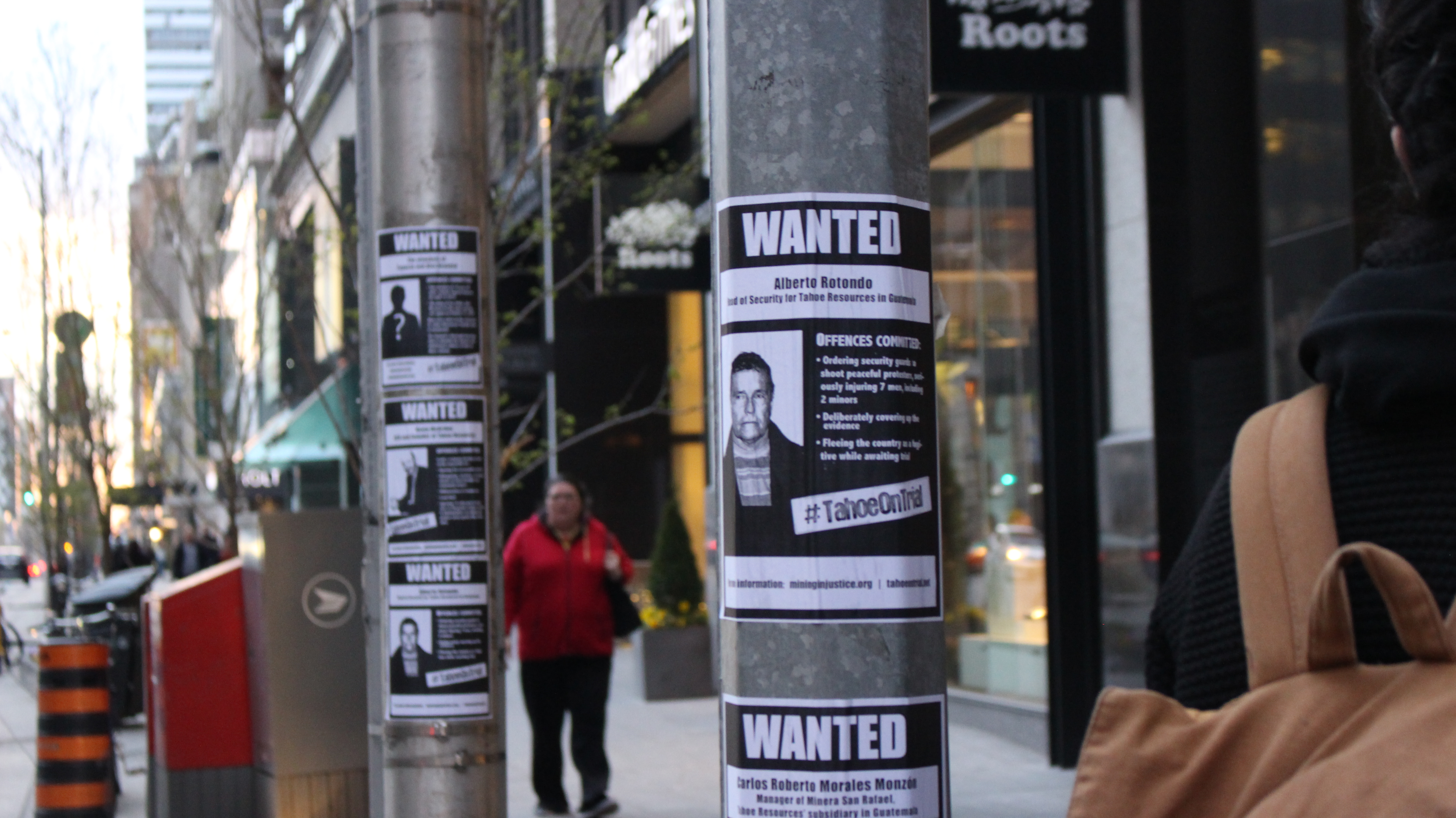 Above: Hundreds of posters covered the streets surrounding the  Toronto Four Seasons where Tahoe Resources’ AGM was held this morning.

“We wanted to make sure that the executives and shareholders entering Tahoe Resources’ annual general meeting were forced to confront their company’s crimes and the violence that communities around Tahoe’s Guatemalan mine have been subjected to in the name of their corporate profits,” says Rachel Small, a member of the Mining Injustice Solidarity Network (MISN), a Toronto based group.

On April 27th, 2013, Tahoe Resources’ private security opened fire on peaceful protesters outside the Escobal silver mine, in the municipality of San Rafael las Flores in southeastern Guatemala.The seven victims, allegedly shot at close range while attempting to flee, filed a lawsuit in June 2014 in Canadian courts against Tahoe for its role in the violence. The company requested that the court decline jurisdiction, arguing that paying for translators and the international shipment of evidence would be too costly and ‘inconvenient’. B.C. Supreme Court Justice Laura Gerow agreed and stayed the lawsuit in November 2015, encouraging the plaintiffs to instead file in Guatemala, despite well-documented evidence of corruption, and widespread impunity for violent offenses in Guatemalan courts. This judgment is currently being appealed. 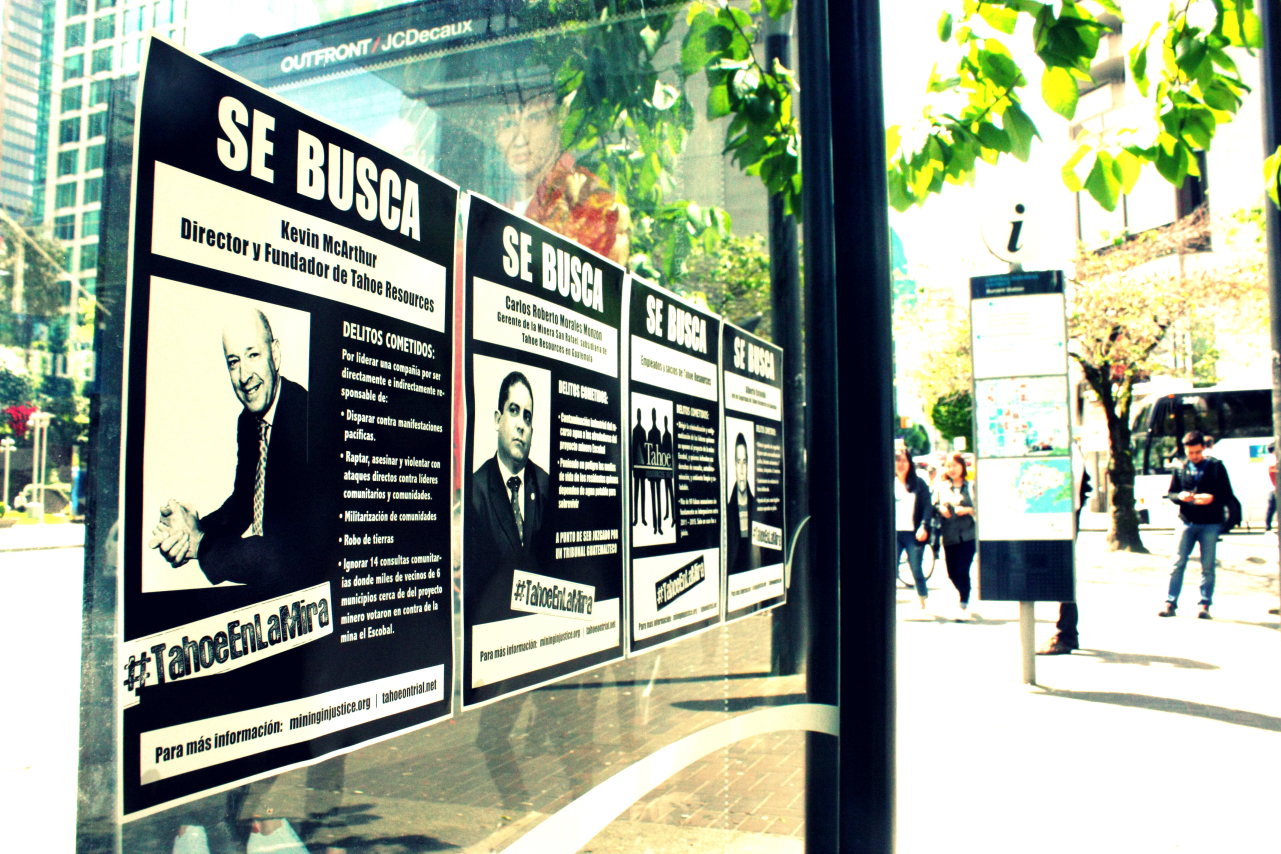 Alberto Rotondo, former military officer from Peru and security manager for Tahoe at the time of the shooting, escaped police custody by fleeing house arrest in late 2015 while awaiting trial in Guatemala for allegedly ordering security to open fire on protesters and then covering up the evidence. After approximately one month as an international fugitive from justice, Rotondo was detained in January by INTERPOL in Peru and is currently awaiting extradition back to Guatemala.

These lawsuits in Guatemala and Canada are only a small part of the bigger controversy surrounding Tahoe Resources’ Guatemalan mine. Since Tahoe Resources arrived in the region, Guatemalan community leaders opposing the mine have faced repression, criminalization and violence. Despite the conflict — or perhaps because of it — Tahoe rushed to put the mine into operation before establishing reliable mineral reserves, reaching commercial production in January 2014. Through 14 community-led consultations in six jurisdictions, over 50,000 people have voted against Tahoe’s mine and its expansion in the area.

Below: Posters mounted in Reno, Nevada, near Tahoe’s US headquarters. 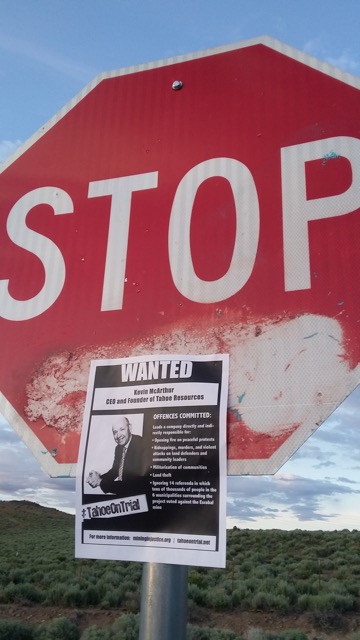 The ‘wanted’ posters describe human rights and environmental abuses linked to this company including murder, criminalization of land defenders, and industrial water contamination. In addition to Kevin McArthur, Tahoe’s founder and CEO, and Alberto Rotondo, the posters feature Carlos Roberto Morales Monzón, facing trial for water contamination endangering the lives of residents near the Escobal mine; the unknown assailants who killed 16 year old youth leader Topacio Reynoso and severely injured her father; and Tahoe employees and associates for targeted criminalization and stigmatization of community leaders opposing the Escobal mine. Out of 90 baseless accusations filed against mining impacted community members between 2011-2015, only one case ever went to trial.

“While the Mining Injustice Solidarity Network dreams of a world where jails are not the main way we promote accountability and justice,” says MISN member Kate Klein, “Tahoe Resources and other Canadian mining companies are operating in a context where corporate impunity reigns. Their lawlessness is especially galling when compared with the intense criminalization and repression human rights and environmental leaders face. This cannot continue.”

The Mining Injustice Solidarity Network (MISN) is a Toronto-based volunteer group that works closely with communities impacted by Canadian extractive industries globally in order to support their self-determination, educate the Canadian public, and bring companies to justice.